The way we elect our MPs is bad for voters, bad for governance and bad for democracy.

The way we elect MPs to Westminster means that our parliament doesn’t represent Britain.

The link between how popular a party is at the polling booth and how many seats they get in the House of Commons is often weak and unpredictable.

Millions of people can support one party and get a single MP, while a few hundred thousand people who support a different party can get ten times as many. This means that the issues that are important in Westminster aren’t the same as the issues the public feels strongly about.

When Parliament doesn’t represent public opinion it has a real impact on life in Britain – it’s time we made sure seats matched votes to put voters back in control.

Major issues can be disregarded

The way we elect MPs to Westminster means that politicians can ignore major issues.

People who vote for candidates who don’t get elected aren’t represented at all. But votes that stack up for winning candidates don’t make a difference either. Once a candidate has enough votes to win, any extra doesn’t make them win more.

These two groups of voters combined made up 70% of voters in 2019. Over 22 million people voted yet had no influence on the outcome. The issues they care about can be easily tossed aside, to be only dealt with when they are too much to ignore.

This isn’t inevitable. Most parliaments around the world use systems that mean they have to work on the major issues the public care about – because voters are in charge. You can find out about different ways of choosing MPs in our Voting Systems section.

Highlights from the Westminster Hall Debate on Proportional Representation

Our voices are easily ignored

Voters want real choice and for their voice to be heard in the election – yet in so many seats the result is a foregone conclusion.

Before the 2019 General Election, the ERS correctly predicted the results in 316 seats, half of all the seats in Great Britain. The majority of voters live in seats that are such a safe bet for a party to win that there is little to no chance of the MP changing. This means parties put all their effort into a handful of hotly fought-over seats – shaping their manifestos to appeal to people in seats they might win.

Whether they voted for the winning candidate or not, it’s no surprise that voters don’t feel part of the system when they made no difference to the result. Safe seats foster political disengagement and cynicism towards our political institutions. The average constituency last changed hands between parties in the 1960s, with some super safe seats having remained firmly in one-party control since the time of Queen Victoria.

Changing the way we run elections so that every vote matters towards the result, makes the walk the polling station worthwhile – for everyone.

We’re forced to work around a broken system

Millions feel they have to hold their nose at each general election and opt for someone that wasn’t their first choice.

In the topsy-turvy world of Westminster’s first past the post system voters often feel they have to cast a tactical vote for a candidate whom they wouldn’t normally support, in order to prevent another worse candidate from winning. Nearly one in three voters said they voted this way in 2019.

Even political parties feel they have to take part in electoral pacts, standing down for each other as the system can’t handle too much choice for voters.

Voters and parties shouldn’t have to try and find workarounds to get their voice heard. Under a proportional system, every vote helps get MPs elected to campaign on issues you care about.

Find out more about tactical voting

Fostering division between us

Westminster’s voting system artificially divides the country, polarising us rather than allowing us to come together. While the results map can only have one colour per constituency, in reality, you’ll never find a town where everyone is the same.

Westminster’s one-person-takes all system makes everything black and white, hiding the many areas of agreement. Every issue becomes a stick to defeat an opponent, rather than something to be solved to the advantage of all.

It’s impossible for one MP to represent everyone in their constituency – which is why in most countries around the world you get a group of MPs for each area, representing the mix of opinions in that area. That’s the core idea of proportional representation – opinions in society are represented in proportion to their numbers.

No guarantee of the right winner

Westminster’s First Past the Post electoral system normally delivers governments the majority didn’t vote for, but it also sometimes puts parties in power, even if they didn’t get the most votes.

The mechanics of the electoral college in the United States are also similar, and have delivered Presidents who did not win the popular vote in 1876, 1888, George Bush 2000 and Trump in 2016.

Whatever happened to majority rule?

Parties regularly form a government even if the majority of voters don’t want them to. This situation has grown worse as voters have chosen to support a wider range of parties. Voters can experience huge shifts in policy from one government to the next – on the basis of a handful of voters in battleground seats changing their mind.

The way we elect MPs makes it harder for parties to collaborate on long-term challenges facing society – and makes for bad government.

First Past the Post is the worst possible system for electing our representatives. We want to see the Single Transferable Vote, a fairer, more proportional voting system that makes seats match votes – and means no one’s voice is ignored.

It is time to make seats match votes

The last two General Elections showed that our voting system is broken beyond repair. This General Election was no better, with millions of voters ‘holding their nose’ at the ballot box, or left ignored in the hundreds of safe seats across the UK. Sign our petition calling for a fairer, more proportional system to elect MPs. 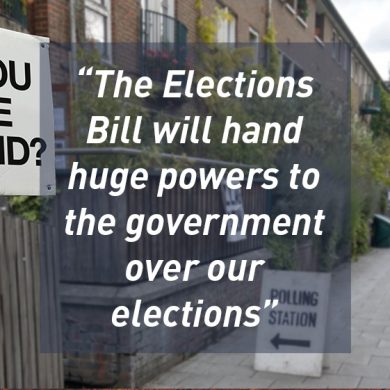 The 2019 general election was pitched as a ‘People versus Parliament’ vote. But the so-called deadlock was a crisis of Westminster’s own making. The way we elect our House of Commons isn’t doing the one thing it was claimed to be good for – delivering decisive results.

Response to PACAC on the Constitution, Democracy and Rights...